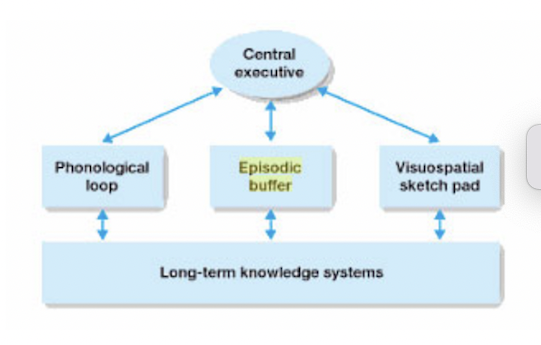 Belinda and I were asked a number of questions about working memory at a recent @d_istractd ADHD event. Working memory is one of many psychological constructs that has been complicated by the way practicing psychologists have interpreted the research literature.

The term originated with the research psychological scientist, Alan Baddeley. Baddeley’s theory is that short-term memory is composed of two storage systems, the visuospatial sketch pad and the phonological loop which hold visual-spatial and verbal information respectively, and a top-down executive function that helps maintain information in these systems for long enough to be processed and which helps integrate incoming information with known information. He used the now famous term working memory to describe this top-down function.

Working memory as defined by Baddeley and others is a concept. In order to perform research on concepts, scientists need to design behavioural tasks that allow some form of measurement. It is critical for us to remember that working memory is a cognitive function. We can’t see or measure it. The tasks scientists design and refer to as “working memory tests”, are therefore imprecise because they are measuring behaviour; behaviour being what the body does in response to the directions given by the brain. No matter how much we hope all behavioural tests have a lot of error in them. Classic tests like digit span do give an indication of working memory but they are also measuring a bunch of other things.

Working memory is an interesting and important construct. We can define it as one’s ability to manage complex tasks. However, it is not separable from other executive and cognitive functions. Neither is it separable from the environment. Hence, testing for working memory is very problematic because an individual may have normal scores on tests that are meant to measure working memory yet have great difficulty managing complexity for certain tasks and within certain environments and vice-versa. For example, one’s ability to manage complexity first depends upon one’s ability to stop. If we are not able to inhibit the initial impulse to respond to a stimulus without thought, working memory and other higher-level cognitive functions do not get the chance to operate. The regulation of one’s nervous system also interacts with memory capacity. We can all think of examples where we were nervous or worked up and the subsequent adverse affect on our ability to think. Task value is also important and can explain much of the inconsistency in people who have attention/executive problems. All of us can better get ourselves “up for it” when a task is of high value. The associated arousal allows us to make better use of what cognitive capacity we have available, including working memory. Conversely, low interest/task value generally impairs our cognitive performance. Skills are also critical. The better one’s skills, the lower any higher-order executive demands, including working memory. Imagine a Formula 1 driver in a streetcar. Their high level of skill means that not much attention is required because the task is very simple to them. Conversely, a learner driver has to employ considerable amounts of brainpower, meaning that they may make mistakes due to difficulty handling complexity even if they have “normal” working memory and other cognitive capacity. Finally, the environment is important. For example, sensory demands, such as dealing with heat or annoying noise, will affect all cognitive performance as will overly complicated tasks and/or imprecise instruction.

As always, it is complex. Working memory cannot be defined by test scores. Neither can it be trained by practising cognitive tasks like remembering digits or shapes or by any other kind of brain training programme. Further, because it is just one of the executive functions and because it interacts with those other functions, with domain-specific skills and with the environment there can never be a single, separate treatment for working memory. Working with someone who has difficulty managing complexity must always involve attempts to change other cognitive functions, such as the ability to inhibit impulses, attempts to improve behavioural skills, such as domain-specific skills like writing or behavioural routines, such as a getting ready for work routine, and environmental modifications.